Hello ,
This convention is an event exclusively for the napoleonic .
The objective is to play and present different rules on different formats (army corps, divisions, brigades) and sizes of figurines (6mm, 15mm, 28mm).
This event will be annual and responds to our June convention: the 19th Levée En Masse (Massive Levy) in june the 2&3 2018.
It will be held on the premises of the Kremlin Bicetre (PARIS , France) Citizens' House on Saturday, February 10, 2018 and Sunday, February 11, 2018.
More informations here:
7 games already set-up: (open to all other proposals)
On-site french*** meals on Saturday evening & Sunday lunch
No fee for the event, just few € for the meals
No reseller or bring & buy (our june annual convention is open for that)

How to get there:
Metro line 7: The Kremlin-Bicètre or Porte d'Italie
Help to scheddule your trip to Paris if needed , feel free to ask
for non players: exhibitions orders and help

sorry for the pigeon english , 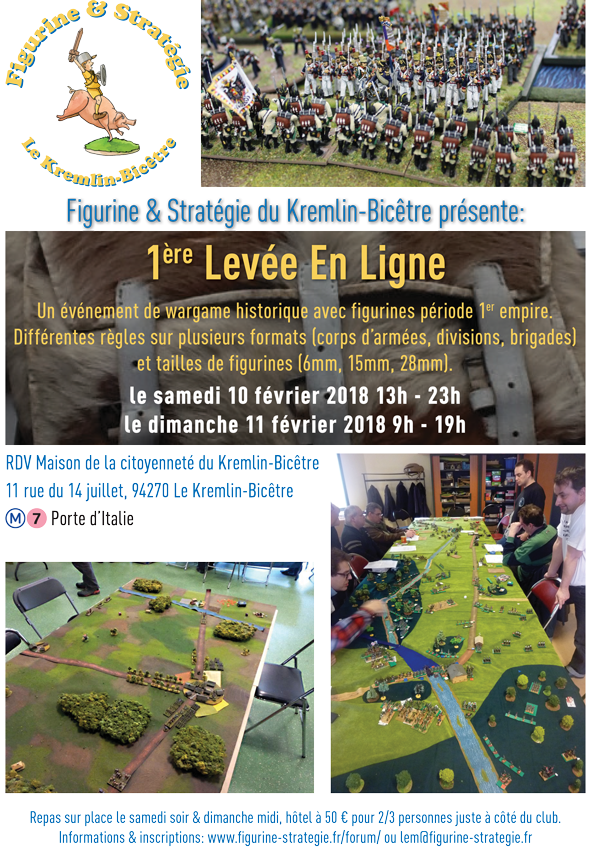